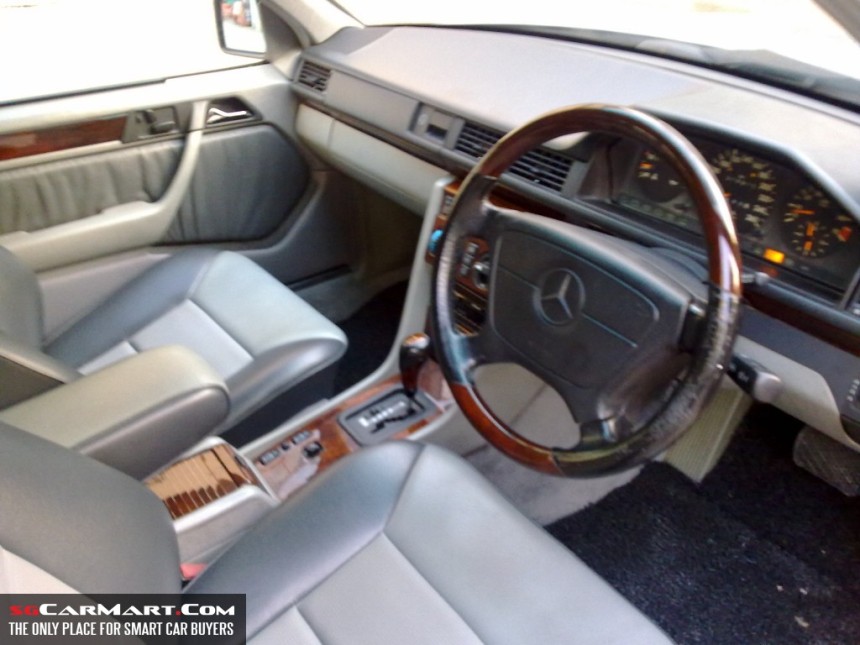 No Bangerwatch collection is complete without mentioning the W124 Mercedes E-Class. We are sure you already know all about the 200E/E200s in the market, for there are plenty, so here is something a bit special to mark the entry of the W124 into Lenspeed’s books.

The W124 is probably the most recognised Mercedes on Singapore’s roads. Its rectangular-blocked headlights cut to an almost 90-degree angle obsession, boxy looks and timeless design ensures its a design people won’t forget easily. It isn’t beautiful, but you can’t deny that it is a functional, lasting design that works. Designed by Bruno Sacco, he is widely regarded as the man who gave Mercedes its rock-solid identity that continues today, even though its newer designs have failed to capture the same spirit.

I have actually lusted after one before, after ridden in a neighbour’s E200 on the way home from steamboat. It was exceptionally refined for its age, the gearshifts were responsive and even quick (a shedload better than the 5-speed mated to much newer pre-2011 W212s I reckon) even though they had just 4 speeds and it could soldier through any bumps on the road with cosseting grace. Perhaps the only complaint was the harsh 4-cylinder engine, which to be fair had a good deal of torque that was sufficient for daily driving.

But then curing just about the only fault with that experience is the E280 here. In ‘Masterpiece’ spec it includes the two-tone interior but most definitely not that regrettable huge Mercedes grille hanging on the front grille.

The 2.8L inline-6 engine M104 is a DOHC producing 194hp and 270Nm. Those figures look impressive even today and can assure that this W124 does not suffer the same harshness of its lesser siblings. I can’t vouch for how it drives, but this is worth a look if you’re in the market for W124s.

One thing about this car is that it is a tad expensive for a car whose COE expires in 2014, and retails for $19,800; we have also visited Mr Benz Traders before which no doubt has a vast collection of old Mercedes cars, but felt like a slightly dodgy enterprise to deal with. Nonetheless, being the only W124 E280 you will have quite a lack of choice.

Apart from that dodgy front grille, everything looks good from the pictures, although we can’t help but ask what difference a doctor owner makes (they drive their car surgically, perhaps?). Go take a look if you want to try what a real Mercedes feels like!

*Pictures are off SGCM.