The European summer is almost upon us. It’s April in 2014, but in countless occasions over the last few months I have been dreaming again and again about Lenspeed’s awesome Alpine tour. Did it really happen? Was I really at the Nürburgring, then up at the Alps, before finishing school and entering the corporate world proper? It is all fuzzy now, especially since the transition from university life to work has been sudden and paralysing, the latter at least in terms of the lack of free time. But one thing is for sure: I did not do my journey justice. It was more than 3,000 miles of driving, across 7 countries, all in the search of the thrill of driving. However, apart from a few Facebook posts, the story of the humble blue Clio 200 Cup across Europe wasn’t shared. That would be fine if not for my fading memory, which motivated me to pen this all down before they disappear into the whirlpool of an ageing mind. So, ladies and gents, fasten your seat-belts, get snug into the Recaros, and join us as we hop on the Eurotunnel for the continent… (time reverses to June 2013)

Pre-trip background: The dates were set for the road trip. We’ve got the car, we’ve got the people. Now, where do we go? Thanks to the helpful chaps at Pistonheads.com and the ever-reliable Google Maps (not so sure about the new one though…), we plotted our way from London to arrive at the Ring, but not before settling on Grindelwald as our base from which to explore the Alpine routes. It all came together somehow.

Arriving on the mainland, we quickly sped across the dull Belgian landscape, passing Netherlands for a brief moment before entering Germany. En-route, we chanced upon an unexpected delight: vineyards. As we’ll be staying in wine country for the night, we drove through vineyard routes for the rest of the day for the heck of it and captured this shot in what seemed to be in the middle of the estate, with nary a care or concern. Confession: we stole no grapes.

Our next stop was at a chalet town which can genuinely pass off as a set in a perfect Hollywood neighbourhood. Every house is identical, brand new and to be honest, a little creepy, as most of them were empty at this time of the year. And don’t be fooled by their tame looks – their interiors are filled with motorsport-inspired decor (ours had Senna and old F1 memorabilia). With good reason of course – it is at the gateway of the Nürburgring, just a 5-minute drive away.

As our time at the track was not scheduled until the next day, we took a drive around the Ring. Yes, there are roads surrounding the track – its scale cannot be underestimated. At nearly 18 miles long it is literally a strip of tarmac laid over rolling mountains and lush coniferous forests, so at many points of our tour we could not tell that we were at Ring territory at all.

Sadly, all the talk about the Ring being underutilised is true. While the track itself is adequately booked up, the accompanying facilities are all like ghost towns. Besides huge conference halls and a go-karting track, there is even an indoor roller coaster built into the facility – I kid you not. As expected, these things don’t get used often at all. 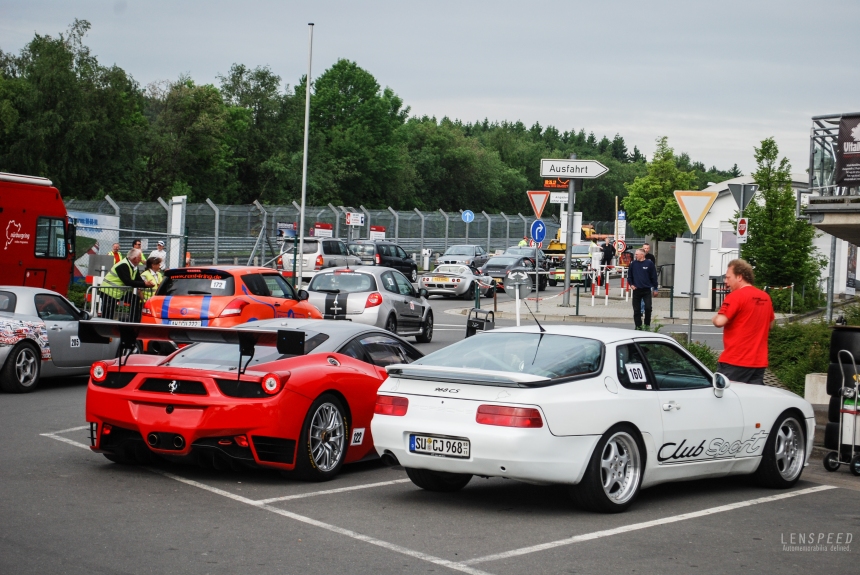 After a home-cooked dinner and some ill-fated attempts at trying to master the Nürburgring via YouTube, we slept and awoke fresh the next day seeing this “traffic jam” outside the track. This is, of course, an everyday sight at the world’s most famous race circuit, with winged Ferrari cup cars sitting next to road-going classics like the 968 CS. Of course, there are also many rental cars waiting to go in, and we’ll be in one of them soon.

At the Devil’s Diner just outside of the entrance of the Ring, the Hall of Fame is scribbled upon by millions who have passed by and enjoyed the comfortable facilities of the Diner while they waited for their turn at The Green Hell.

Being the Porsche fans that we are, we took a gazillion pictures of the 997.2 GT3 RS 4.0 that stayed for the whole track day, of which this is one… 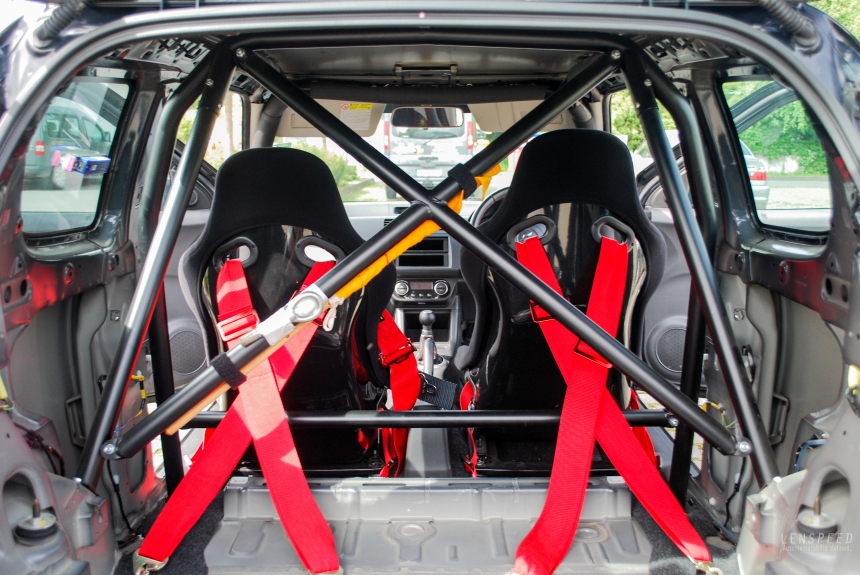 When we collected the Swift Sport we realised just how race-prepped this little tike was – this is the view from the back of our car. Being modestly powered the car was supremely exploitable at the demanding track, but knowledge of the circuit layout was paramount to having a good time… I will advise anybody thinking of making a trip up to be well-versed with the Ring to maximise their time there.

Next up was my turn in the Lotus Exige 240 Cup. It’s a riot, and almost uncontrollable on the track, especially with public day traffic. Another tip: if you’re at the Ring, I’d highly recommend a private track day. Less mishaps, more time and more space. 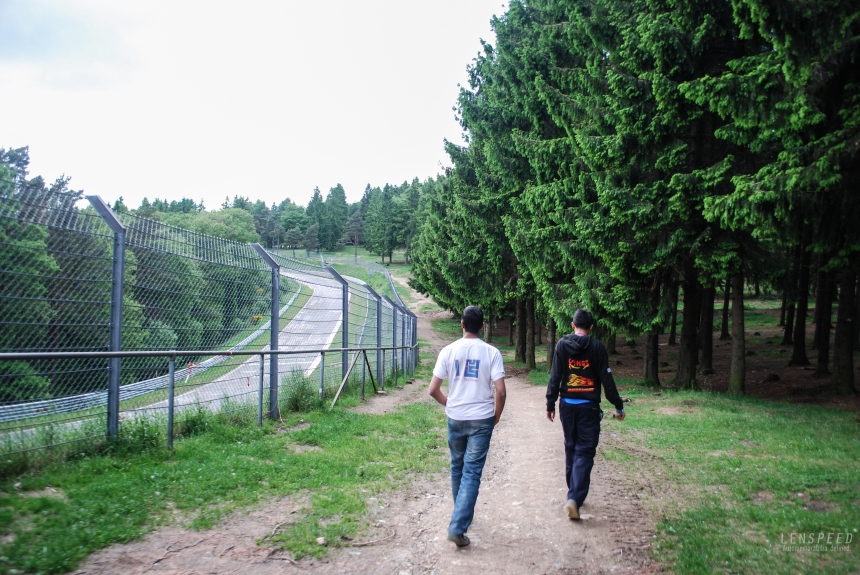 After we escaped certain death, we took a walk around the track to check out the scene. When cars are not passing by, the forests are actually really serene. It could pass off as a national park, and it is one.

If you ever wondered how mule spotters do their work, this is one of many vantage points around the track allowing you to peep at the machinery passing by.

We were honestly quite relieved that we lapped the Ring without any mishap. It was the riskiest part of the whole trip, and with that behind our backs (with bragging rights in tow, of course) we headed down south for the Alps. Of course, we do this route no justice without a stopover at the Black Forest… 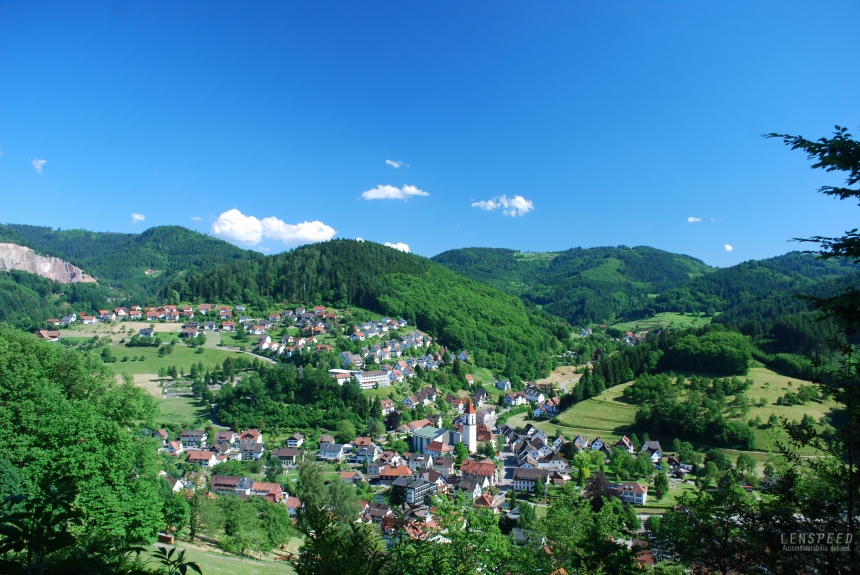 After the rainy Nürburgring, the weather at the Forest was simply magical. The roads were almost empty, and when we reached our stop we took a hike. As it turns out, there is beer on tap at every few kilometres up the track.

Nothing could have really prepared us, however, for what laid ahead when we arrived in Switzerland. Suddenly, the Black Forest (which actually isn’t black at all) swept past our minds double quick time as snowy peaks greeted us.

As well as a lovely dedicated car park garage!

There were moments of serenity (that’s dad taking photos)… 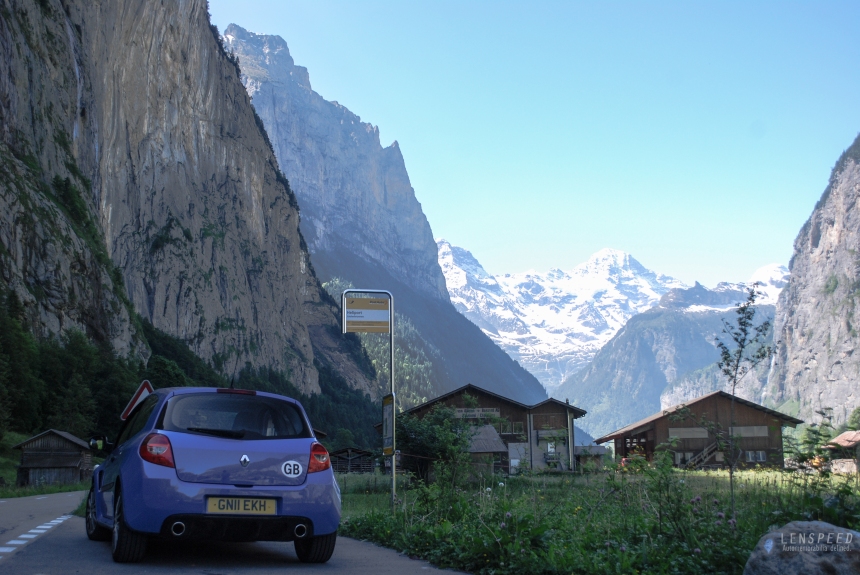 But for sure, moments of staggering beauty as well.

While we were in the area we took a short detour up to Gimmelwald too (no cars allowed here). We used our legs instead and the view didn’t disappoint…

However, after the adequate exercise from trekking the mountains we wanted to take in the best Alpine passes Switzerland had to offer. By four wheels, of course. Setting the alarm at 4am, we started nice and early. It was a great feeling that so early in the day the sun has already risen, yet everybody is still asleep. These few hours must certainly be called “driver hours” for their perfect conditions. The itinerary for the morning: Grimsel, Nufen, Gottard and the Furka Pass. 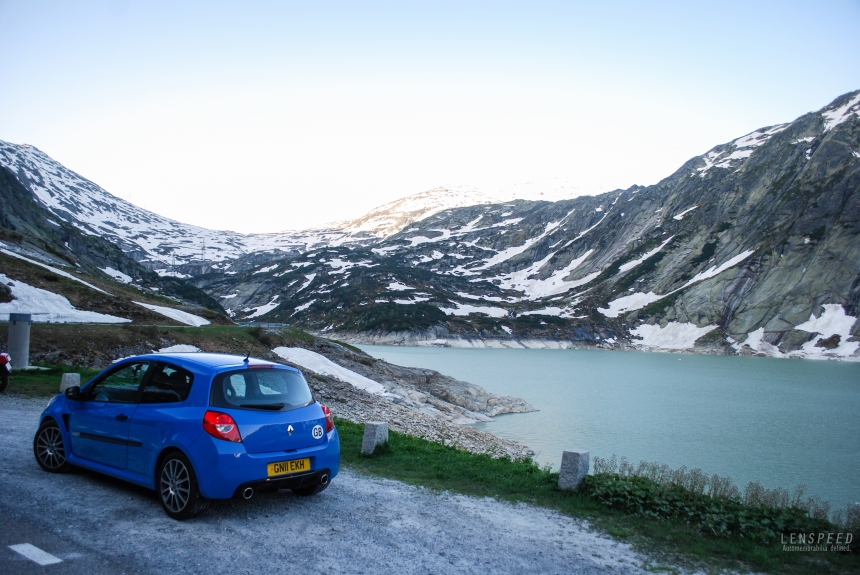 We climbed and climbed until we saw snow, and a murky lake that looked frigid.

As we rose, the sun rose together with us and temperatures started to peak.

Needless to say, everywhere we turned the scenery was breathtaking.

Here’s a video of how the Furka pass was like.

At some points, the snow reached nearly double the car’s height but the road was bone dry. Thank God for the efficient snow ploughers which were no doubt working through the night to get the road cleared for us… Also, if any snow were to fall that morning, we would have been stranded! The Clio was on summer tyres.

The valleys became slightly hazy as we crested across several peaks.

But soon, we were in what must be one of the longest tunnels in the world, if not the world’s most impressive. Remember the scenes in the James Bond films that were filmed here? I really wish I was in an Aston Martin, although the exhaust note of one could cause an avalanche from all of those precarious-looking snow.

There was beauty everywhere, even in the small details. 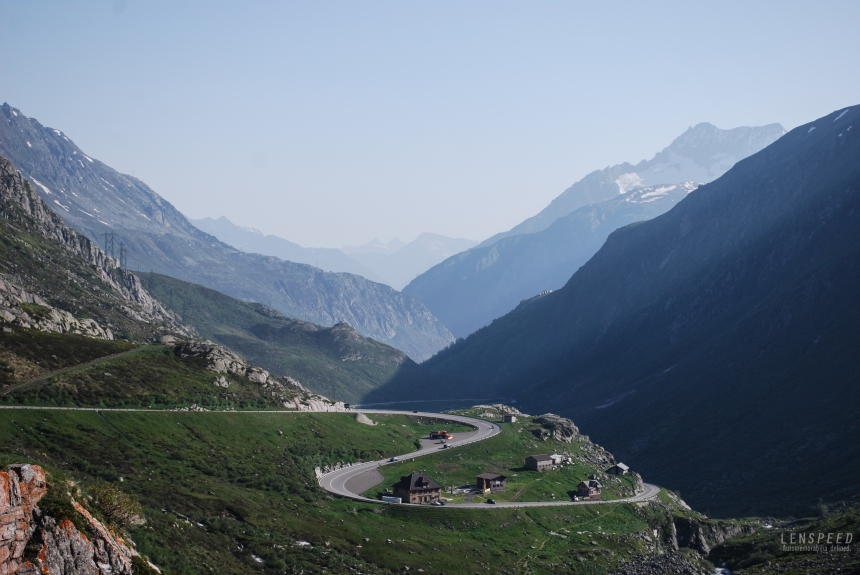 All that you see in Top Gear et al, it’s real. 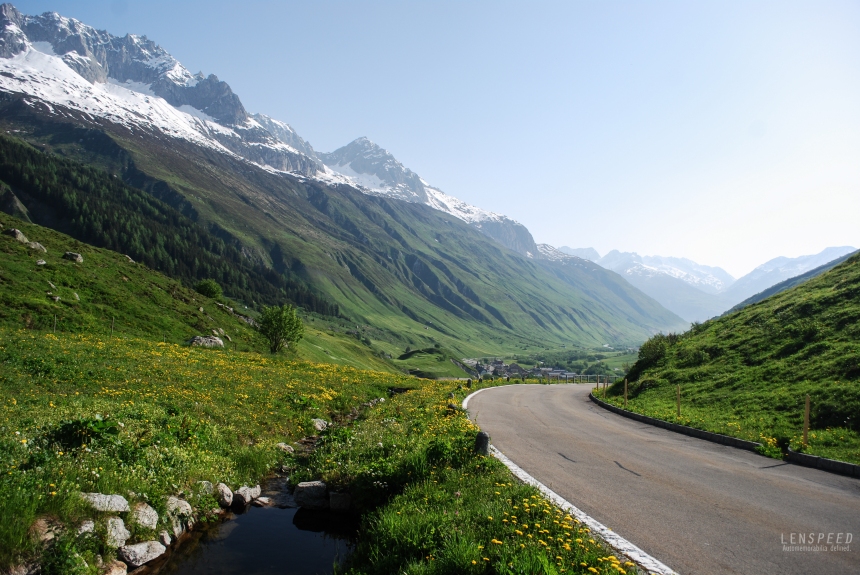 At the base of Furka pass, we had to take a stop to take in all of the beauty (and grazing cows, not pictured).

Furka is incredible. Instead of the snakey curves of the Stelvio, it has long, wide and flowing roads that were so well-sighted you could take either lane any time if you wish. Definitely deserves a big approval from Lenspeed.

Just proof that we didn’t fake everything (ha).

The front-wheel drive Clio proved to be a hoot in these type of roads, with just enough power to climb the mountains without feeling like it’s struggling while having the darty front end response to sniff out hairpins.

Of course, with every rise there is also a fall. At the base of Furka, we were met with acres of yellow flowers. That’s the end of today, then – back to Grindelwald to recover back the lost sleep… But what a worthy drive to wake up for!

Our final jaunt south brought us slightly warmer temperatures and more balmy environments, which meant that everything looked greener and more lively. Take this turquoise lake for example, while we were en-route to Stelvio.

As we entered Italy to climb Stelvio from the south side, it dawned upon us very quickly that the Stelvio is extremely popular with tourists and enthusiasts. As such, the narrow roads going up were simply no fun. There are many moments where we had to reverse to let a whole convoy of cars through, while managing deep drops to the ravine at the sides. Luckily, we managed to take a breather here before proceeding further up.

This is just a teaser for what’s to come. Consider it mini-Stelvio…

The real deal is a lot steeper, with a rougher edge to it that hints at its poorly-maintained nature. I cannot deny that it is a terrifying climb up this road, as it is so narrow and you literally only go upwards, only taking breathers while you slow down at the hairpins. I don’t think you can go very fast here or even try to hoon. The Stelvio then, is quite overrated in Lenspeed’s opinion, but it still must be experienced because it is very humbling.

And that’s all of it. It really happened after all. I don’t think much else can top this for some time yet.