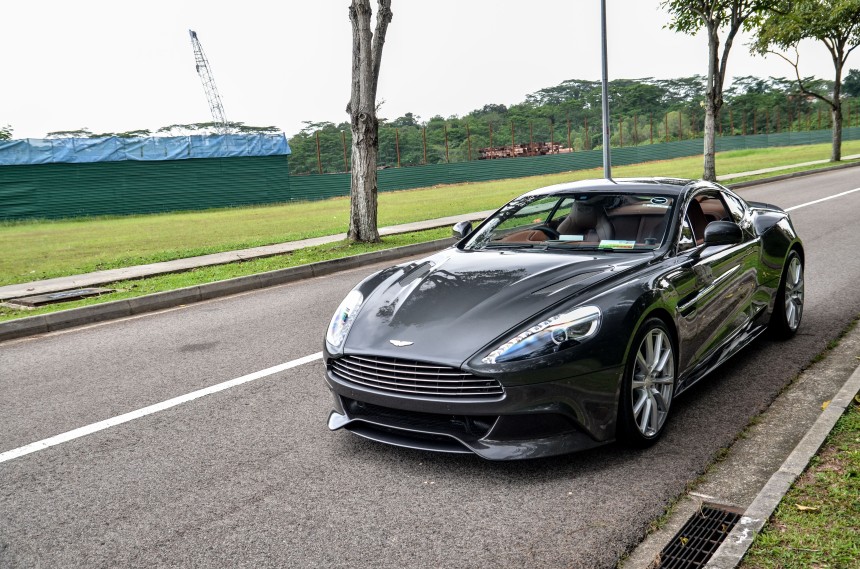 Let’s get it out of the way first – this is probably the world’s best looking two-door GT car. Although our staffer Gerald says the eyelash-like rear lights have lost a little definition (and he is right), there is absolutely no denying the rest of the car looks just spot on. What is really correct is the side profile, which has just about perfect proportions. All of the body panels you see are actually carbon fibre shells laid over with paint, which saves a lot weight. If you just think about this for a moment, it is amazing. Aston’s place as the doyen of automotive design is secure.

But we’re more interested in what has changed for this 2015 model. Aston tends to play it down in its collaterals by putting it together with other improvements, but the biggest and most significant swap is the shift from the old six-speed auto to a slick, ultra-modern ZF 8-speed. This, according to Aston, is the world’s first transaxle 8-speed transmission, which might explain the 51:49 weight distribution. It also offers 130 millisecond shift times, reduces the car’s 0-100km/h sprint by 0.5 seconds and increases its top speed by a whopping 29 km/h. All of this is of course vital because past press reviews of the 6-speed Vanquish have highlighted its gearbox as a major point of improvement. We’ve never tried the last model, but we’re keen to see just how good the gearbox is compared to the semi-auto in the V12 Vantage S we drove last year (read here for our review).

And my word, it really shows the moment you set off in Drive, accessed through a row of crystal buttons on the centre console. Like in your most smoochy luxury saloon, the Vanquish now carries out its low speed duties with effortless ease and poise. Yet there is an urgency to the shifts which is absent in the smoothest of gearboxes. Part of it is down to the short gear ratios, which are possible because of the spread available throughout the numerous 8 gears. But I reckon it’s mostly due to the intuitive technology behind the gearbox, its ECU brain tucked somewhere, which is near telepathic.

Paired with the excellent gearbox is the familiar AM29 engine, a 6-litre behemoth with 568 bhp (+3 bhp over previous) and 630 Nm (+10 Nm). What’s more important is how the engine delivers it – and I am happy to report that at any speed whether fast or slow, you are able to enjoy the glorious naturally aspirated V12. There is a generous helping of torque at the low-end, so you will never really need to stretch the engine if you just want to cruise, although already there is an accompanying exhaust burble that is beautiful. If you do decide to press on, the engine is so smooth, so willing to rev to its redline that you’d really wonder what’s all the fuss about turbocharging. Apart from worse emissions, the throttle sensitivity of this engine, unhindered by turbos, would be hard to match by any force-fed engine. It also means there is no nasty turbo kick mid-corner, and you can throttle into corners with ease. And the sound. Wow – it is only heightened by the super-quick shifts, and the only word I can use to describe it is: apocalyptic.

And if the sound isn’t enough to make you grin, the handling will. Although it is proudly a GT, it also has an ultra-rigid all-aluminum architecture that makes it 25% stiffer than a DBS. And together with carbon fibre body panels, the Vanquish is actually lighter than any of its GT rivals – the Ferrari FF, Bentley Continental GT or Rolls-Royce Wraith. So while it won’t be razor sharp in responses, it can definitely bring joy as you swing the car into a corner and plant your foot down. Downshift (multiple times if necessary, and it does it for you automatically), and the V12 erupts, the rear wheels just twitch ever so slightly as you hit the apex and the car comes alive underneath you as you feel the grip keenly from the rubber. That rear-wheel drive feeling is definitely real and intact, and you can exploit it, rather than it being just a device of convenience. Yet you never feel out of control, and your confidence never sinks. You learn to respect the machine and soon find hooning it quite unnecessary.

So, it really does feel special. But that does not compromise its daily drivability in any way. Steering is geared for easy daily driving, which can even feel a tad light. Sport mode, which stiffens up the suspension, is completely comfortable on the road. On a highway cruise, it is very refined and quiet as its engine settles. Even its ground clearance is decent and you get an umbrella in the boot!

The interior helps too. Every single thing you touch feels handmade and crafted with care. Build quality is hard to fault, but the infotainment system does fall behind comparable systems. That said, it does seem to have a rather slick interface that hides its origins well. There is a haptic touch system to the centre console controls, inspired by the One-77 – it works fine but I can imagine sweaty fingers would have a bit of an issue. The handbrake is also quirky, which is located to the right of the driver’s seat and collapses whether it is activated or not. Otherwise, everything feels very modern and up-to-date.

The overriding feeling after driving the Vanquish is that one can genuinely see ownership as a highly possible proposition. It’s not flashy like a Ferrari and nowhere as twitchy or fiesty; it’s not low-slung like a Lamborghini so you can enter all car parks with ease; it’s not as footballer-friendly as the Bentley Continental GT so it has the right image. It is just so easy to drive, so beguilingly honest it puts a smile on your face when you drive it, and so practical you can almost justify having one as a sensible supercar purchase. It looks timeless, and it is likely to be very reliable too (Aston offers an extended warranty package that’s longer than any other manufacturer in its class). It’s unpretentious, that’s the word. It flicks away lap record times like a useless rat race, fervently holding on to traditional values of good design, craftsmanship, and a naturally aspirated V12.

We urge you to drive one, especially if you need a daily supercar. It’s our favourite Aston by far. Now, time to take it home…