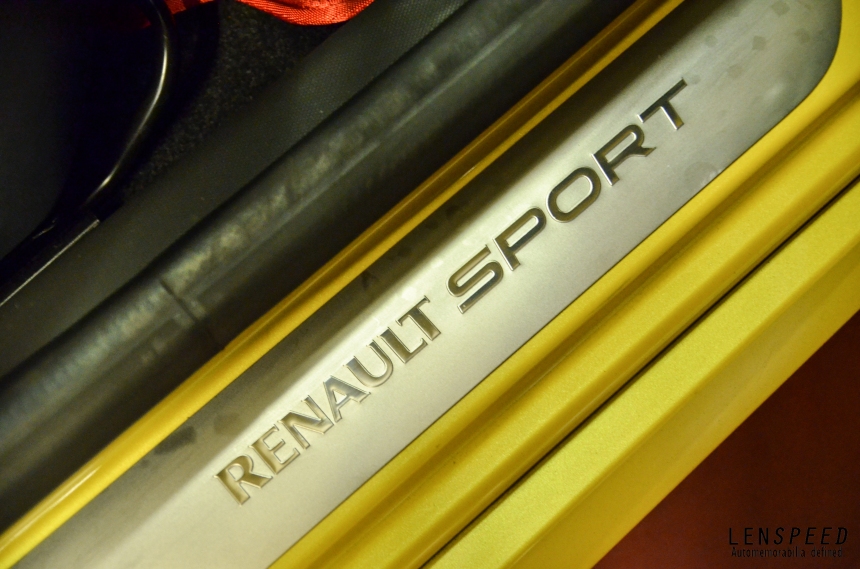 It’s inevitable a few years back that we’d expect the Renaultsport Clio to go turbo. It was only a matter of time. But when it did happen, it hit us like food poisoning – we just couldn’t stomach the fact. What’s more, Renaultsport decided to offer the car only with a dual-clutch gearbox. Surely, a drivetrain decision like this was made with dollars and sense in mind, but in the petrolhead’s mind it was nearly a complete turnaround of what made Renaultsport so special in the first place.

So we thought, why not do a story on how the new Clio 200 Turbo compares with its direct predecessor, the Clio 200?

It’s quite unlikely you’ll read a story in Singapore comparing these two, primarily because the Clio 200 wasn’t sold in Singapore (only the older variant, the Clio 197, did). With different gear ratios, tweaked engine tuning and revised suspension the Clio 200 is a fair bit different from the 197, and will be the ultimate litmus test for the new turbocharged replacement. 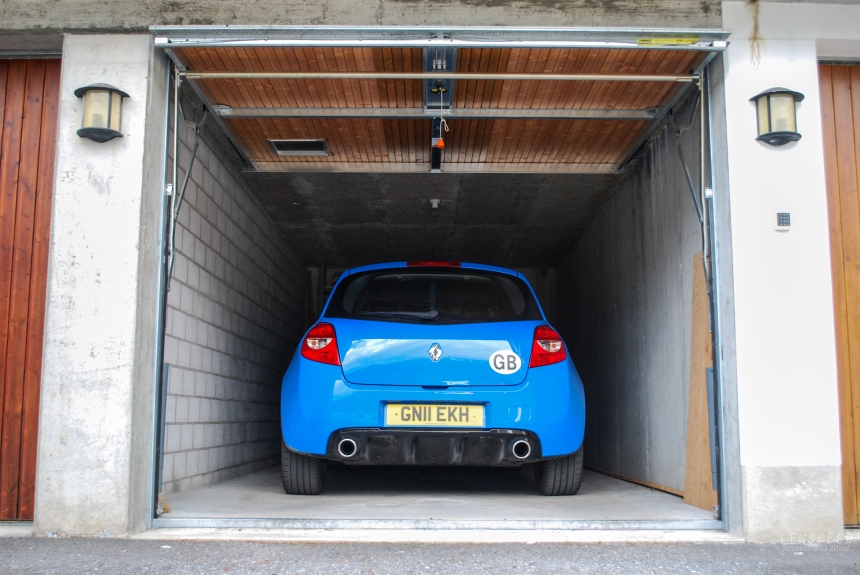 Let’s talk about the old car first. An ex staff car used for trips as varied as this, it was an absolute belter. With a naturally aspirated 200bhp 2.0-litre engine, it’s a stunning engine that loves to be wrung out to its redline. Similar in character to a Civic Type R, the high-revving engine and snick-snack manual gearbox meant that this is probably the closest direct European counterpart to the Japanese car.

Ride was unforgiving, but then it paid dividends in handling, where it was not uncommon to cock an inside wheel in hard cornering. On highway speeds, it was just about bearable but city potholes did slowly create black faces among passengers. The Recaro seats didn’t help with comfort either, but they certainly looked the business and did their proper job.

It’s also a great chassis. We’re not sure what Renaultsport does to these things, but it feels as stiff as a brick (in a good way) and so the car just feels so together. It’s a stunning machine and we do miss it quite a fair bit, one of the finest FWD hatches we’ve certainly tried.

So, the new car has a tall order to meet indeed. 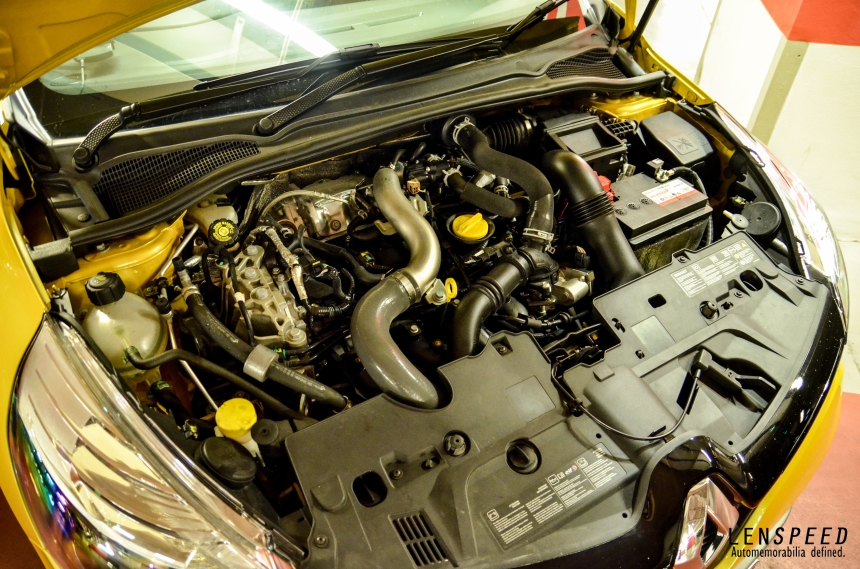 Compared with the rather well-manicured engine bay of the 200, the 200 Turbo has a comparatively messy outlook underneath the hood which is a bit disappointing. With 200 bhp, it’s not a bump up from the old engine at all but it now has 25Nm more torque.

It does not sound spectacular but neither did the old engine which had more engine sound than exhaust sound. That said, the extra torque is certainly welcome, although the car does not feel very quick by modern hot hatch standards.

Its power also tapers off at the top, just when the old engine starts to comes really alive. This encourages you to keep revs low and be lazy with the throttle, which does save fuel and yet also dull the driving sensations at the same time. 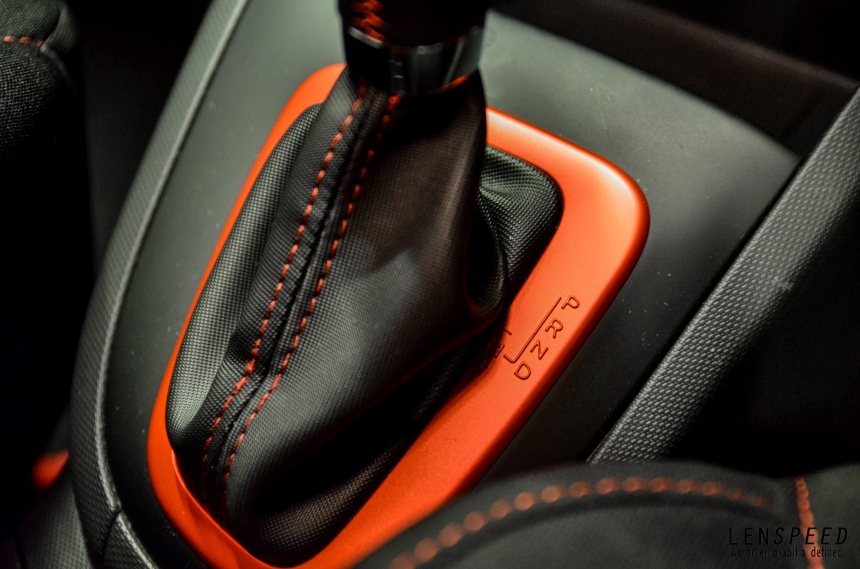 Its EDC dual clutch system has 6 gears, same number as previously but obviously in this application the feedback to the driver is starkly different. We’d probably would be more accepting of it if it had been a class-leading gearbox, but in the 200 Turbo it shifts slowly, unintuitively and a fraction of a second slower than I would like.

To make up for the mundane turbo sound, Renault has certainly put in effort to make you feel like you’re driving something else far quicker. Like a Nissan GTR, for instance. We find this amusing but quite superficial coming from Renaultsport – give us a real good exhaust note, please, not piped in.

Another important difference with the new car is RS Drive. While the Clio 200 was a ‘Sit and Go’ car with nothing to tweak, the new car will allow you to change the character of the car, modifying throttle response, gear changes and all that. We prefer the simpler route, but this does give you options for better or worse.

The steering wheel feels familiar to a Clio 200 owner, but the cabin will be completely different. Although undeniably looking more expensive now, there are still wide swaths of cheap plastic all over the cabin which is disappointing. Also, in terms of architecture it does not seem like the designers put much effort in creating it with flair. 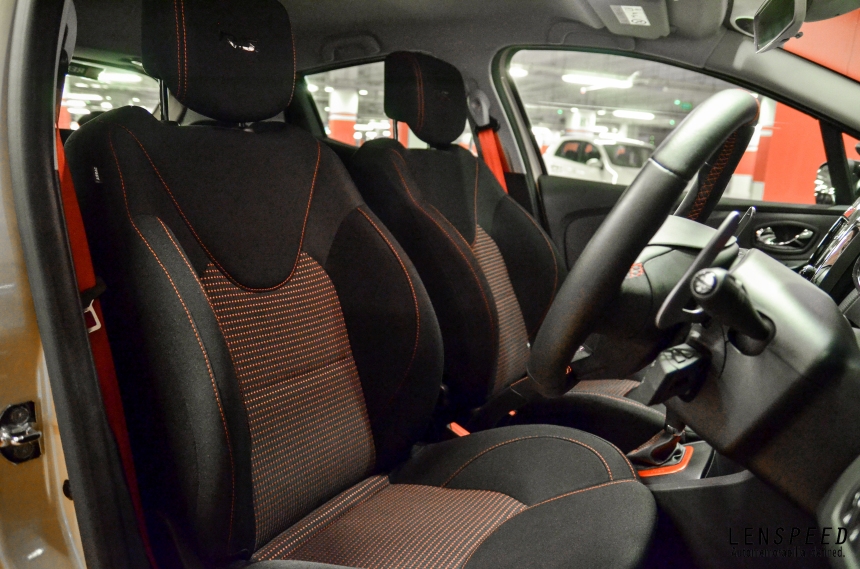 At least the seats are good, though we would have preferred Recaros. 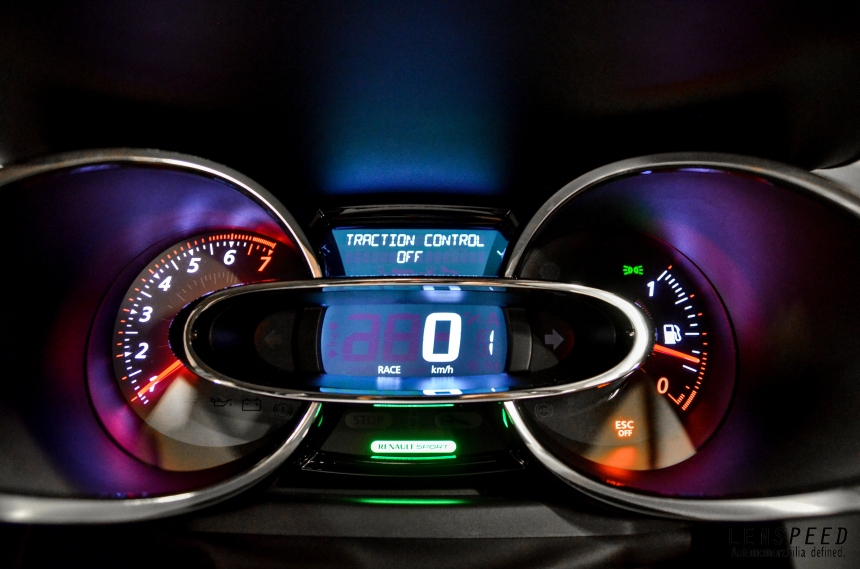 The gauges are futuristic if not unnecessarily fussy. And in it you will see Race mode is on as we did our test drive.

The sensation from the driver’s seat is this: in the Turbo you can still have fun. Renaultsport has not lost the handling edge of the car; it feels nimble, light on its feet and responsive. The steering linearity feels quite similar to the old car, which is great, and the new car does ride more comfortably which is fantastic for highway schleps.

However, the drivetrain is a let-down due to the flat engine and slow gearbox. Had the drivetrain proved to be shoring up the weakness of the NA/manual combination (low torque, can be tiresome), then it perhaps could have given the 200 Turbo a fighting chance for a good showing with its predecessor.

Unfortunately, not only is the older car’s drivetrain much, much more engaging, it also handled just as well, if not better, with a slight trade-off in ride comfort.

You would know what we’d pick – the better driver’s car, the naturally aspirated Clio 200 Cup.