Every man, even with just a passing interest in cars, would have heard of Aston Martin. A nameplate with a reach that extends beyond its physical presence in Gaydon and into the shared subconscious of the world, Aston Martin has the advantageous position of being envied and desired before one even considers its automobiles. It is a sweet, delicious bonus then, that it also makes one of the most beautiful coupes in the world.

The Vantage has already been around for a good nine years, since its unveiling at the Geneva Motor Show in 2005. However, it is a car that has not aged one bit on the outside. There is a purity to its lines that speak of perfect (and I mean perfect) proportions and a careful trimming of any excess bodywork. Just imagine all of car design put into a beaker and distilled – arguably, the Vantage will be the purest form to emerge from the admittedly rudimentary experiment, but you get my point (Chor: I believe the 458 stands as a strong challenger in this regard!).

Continuously improved over the years, the most extreme road-going version – the V12 Vantage S – was announced in 2013 and nearly a year after we’ve got the keys to one. It is capable of 330km/h (or 205mph in “British speak”), which makes it the fastest series production Aston Martin ever. But Aston Martins are never about class-leading speed or performance. If that is the yardstick, then there are plenty of competitors that can offer far more for the same money, or less. Will the V12 Vantage S be any different from its brethren?

For one, it certainly has got the numbers on paper to back it up. With an increase of 55bhp and 20Nm from the standard V12 Vantage, the S is capable of doing 0-100km/h in just 3.9 seconds. That makes it nearly as quick as the 997.2 GT3 4.0 RS or the Pagani Zonda Roadster. But plant your foot down and you may wonder whether that figure is achievable. While it is unquestionable that it has a lot of power – you can get in-gear wheelspins even in third gear, above 4,000rpm – the way the car goes about delivering it does not do a convincing job of making the car feel 3.9-seconds fast. Of course, that is not to say there is any lack of power. It’ll be more than you ever need, and certainly feels a tad excessive in the pert Vantage with such a short wheelbase. As if the V12 Vantage wasn’t mad enough! But alas, it does fall short of delivering its promise on paper, even if it is a superfluous point.

One reason this sensation is exacerbated is its gearbox. Despite being equipped with the ‘new’ 7-speed Sportshift III automated manual transmission, the shifts are slow and slurred. We at Lenspeed always believed in manual gearboxes, or an excellent automatic like the ZF 8-speed, and the Sportshift transmission did nothing to make us think otherwise. It really feels quite antiquated, and does not even blip on downshifts, which erases the sporty edge that really is the only thing going for such gearboxes in full-on driving situations. Given that the V12 Vantage S is supposed to the ultimate sport model in the entire range, we feel it’s inadmissible, as far as we can tell from our test drive. Maybe being on the track would change our mind.

While the car doesn’t really have the perfect drivetrain, it certainly gives feedback to the driver in an old-fashioned way that we like. From the alcantara-clad steering wheel, you can feel the rear wheels digging for traction when the engine fights to deliver all 565bhp and 620Nm to the back, and it is comforting that you can still read this from the driver’s seat. The steering feels genuine in feel and response as well, but what really stands out are its carbon ceramic brakes, which offer a brake feel that is uncharacteristically good. With huge reserves of braking power, it does not give it all to you in one frantic burst, but in a gradual, linear manner that swells confidence in the driver (Chor: the ability to provide such an effective braking system without compromising the driving sensation, is a testament to Aston Martin’s dedication in preserving the ‘true’ driver’s car). Did we forget the sound? With an exhaust system that is reportedly derived from the One-77’s, it is a stellar vocalist, as with all Aston Martins; it does not intrude into the cabin either. As a whole, the V12 Vantage S certainly feels old-school in the way it engages the driver on an emotional level, which is a breath of fresh air in these days of synthesised experiences. However, being old-school does not disguise the fact that it is still a flawed sports car. If it does not fulfill that remit convincingly, does it still possess the traditional Aston Martin grand touring values?

It’s definitely a comfortable car, one in which you wouldn’t mind doing a long road trip in. Whatever damping setting you put it in, it’s still a supple car that will find a fluid rhythm with the road. That said, its front carbon fibre splitter is set so low that you will think twice attacking nip-and-tuck roads at speed, which is a pity as it dampens its daily driving ability somewhat. 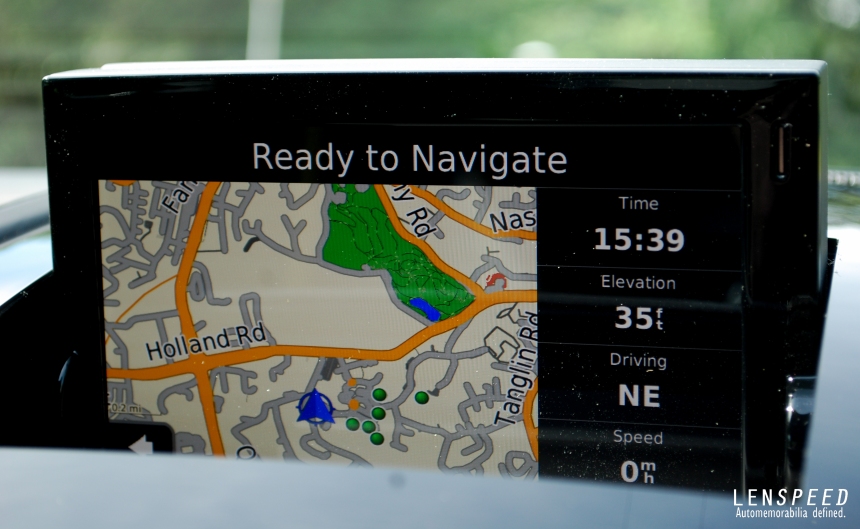 Inside, the seats are comfortable and supportive, and there is no shortage of room despite the car’s compact size. However, the interior architecture has hardly been changed and its age is showing. The instrumentation, while nice to look at especially at night, has fonts that look decidedly dated. The pop-up satnav is a Garmin-sourced unit, which looks out of place in a car worth almost a million Singapore dollars. There also lacks a certain sophistication in the execution of the cabin, although there is no denying the quality of leather used is excellent.

For long-haul trips, the V12 Vantage S certainly can deliver with an engine that is tractable from low-revs, aided by rather long gearing. However, driving around town requires a delicate handling of the gearbox, which requires you to understand it, sometimes in frustration. Overall, the car fulfills its GT credentials pretty well, perhaps in a better way than its sporty side.

The V12 Vantage S has its work cut out to take the fight against the best performance cars in the business. The Ferrari 458 Italia, for example, excels in both the sport and GT aspects. We turn now to where we began: would the Aston Martin’s charm, looks and inexplicable allure be enough to win buyers over?

It’s been working for Aston Martin, but there is a worrying trend downwards. Sales peaked in 2007 with 3,963 units sold worldwide, but it only sold 1,853 units last year, despite the introduction of the four-door Rapide, which should have garnered more buyers for Aston Martin in the Asia Pacific markets. Being a small-volume manufacturer, it lacks the economies of scale in research and development, which is why cars like the DB9 have been soldiering on since 2003, why the same 5.9-litre V12 has been used relatively unchanged for almost a decade, and why the V12 Vantage S has a Garmin unit plonked on its leather-lined dashboard. 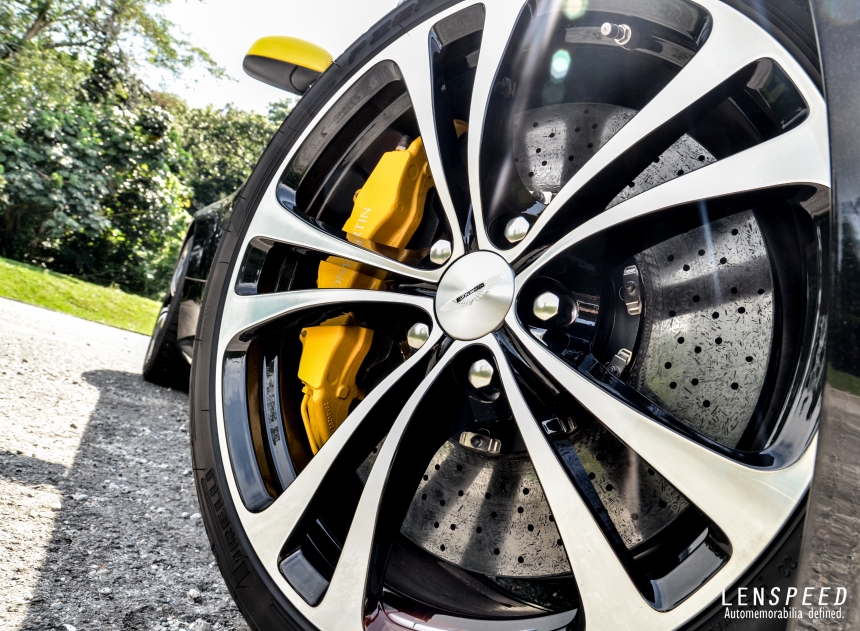 Until Aston Martin finds a much larger manufacturer to economise the extremely pricey world of automotive development, it will have an uphill climb ahead. That said, Aston Martin is proudly independent “in spirit and ownership” and it recently announced a tie-up with Mercedes-AMG in a drivetrain partnership. There is still life in this company yet. However, in this time of transition, the V12 Vantage S remains a flawed machine, albeit we admit a very beautiful one to tide the company over – and sometimes, we have to look beyond the blemishes to appreciate the big picture.