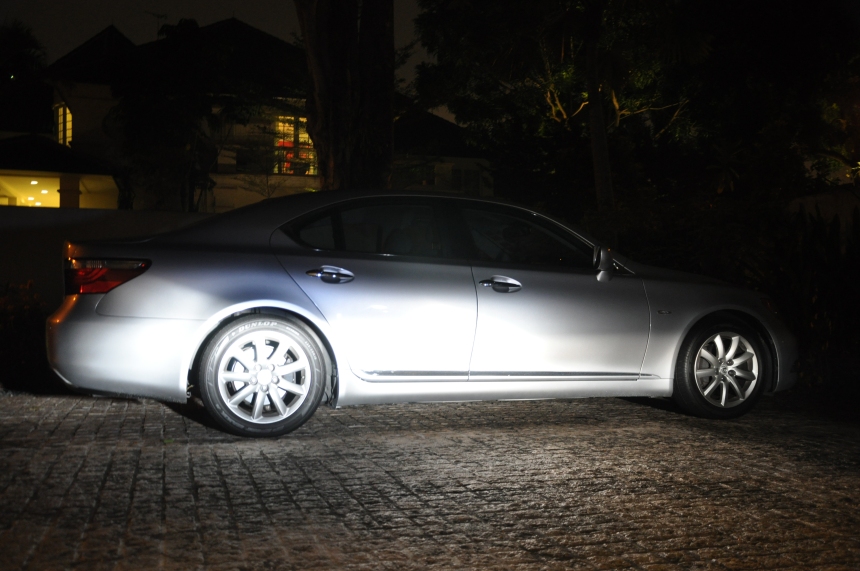 Following the end-of-term report of our E250 CGI, we’ve quipped that we’ve got something new coming round the block.

Well to be fair, it has been in our hands now for almost half a year but I haven’t written anything about it yet. So to make it all official, here it is: we’ve bought a used LS460.

It had 96,000km on the clock, which in limousine terms is small chips considering the galactic mileages they usually do. The best thing about this one is that it’s been serviced every single year with official Lexus dealer Borneo Motors, so I am quite relieved that its history is solid and intact. We still brought it through the used car check with the AA though, which was worth every cent. They took ~4 hours to inspect every nook and cranny of the car to give you an unbiased, fair assessment of its condition. I would highly recommend anyone who is considering getting a used car to get this done, especially one without service history (as is usually the case in Singapore where service history isn’t really paid attention to). It’s a darn good deal too at around $150. It received a clean bill of health, except tyres that were in near shredding status.

We aimed to fix that first and perhaps by a stroke of coincidence, we chanced upon a tyre shop in Malaysia that happened to stock Michelin Pilot Super Sport tyres. I recommended my dad something cheaper, but at nearly 20-30% discount to Singapore prices, how could we say no? In the end, the luxo barge was equipped with the sportiest road-biased tyres money could buy. I did doubt the reason behind the decision, but on the journey back to Singapore it proved its worth: the wobble and vibration that came above 140km/h all but disappeared and the tyres proved to be as quiet as the comfort tyres we had previously. Plus, I am rubbing my hands together at the grip these PSS tyres can produce once they are fully worn in (they’d have been by now!). Happy days.

Initial impressions? The fuel consumption is fantastic for a 4.6L V8 – I am averaging around 14L/100km, but my dad is more capable with these sort of things and he can get about a litre or two off that. On a 180km/h steady cruise on the motorway, with the 8 gears, the car can hit below 11L/100km quite comfortably. At that age, at that size and weight, it is incredible. I always had the biased thoughts that Japanese cars are always more frugal, but it really proved itself to be true here.

The handling is pure limousine – it has been quite a while since I last drove a car so comfort-biased. If you read my previous E-Class posts, you’d know that the Mercedes rides more like a sports sedan. This Lexus, however, is all about riding on air. I would say though that the ride is excessively soft. First few drives have proved more difficult than I first imagined, with body roll that borders on being dangerous and a genuine need to slow down the car substantially while cornering to prevent discomfort to passengers. Now I can empathise with Lexus drivers a little bit more: it’s not that they want to drive slow, it’s because their car doesn’t let them to drive fast.

The steering is not feelsome, but neither is it totally detached from the road either. It just feels very Toyota, which in my books is just fine for the LS. It did have some lumpy movements lock-to-lock, but that seemed to be cured with the new tyres.

First service experience was great: we had our car picked up from our home and then delivered back when it was serviced. It was fuss-free, and Borneo genuinely treats LS customers as first-class. Toyota understands that selling a luxury car is as much the front-end performance (the car) as much as the back-end (the service). We’re looking forward to many more years of excellent service.

That’s my update for now. Some pictures will be up in due time – we’ve already had our first photoshoot with this faithful giant. And the car’s airconditioning and sound system really made our task easier!

PS. This is the short wheelbase model, as we appreciated the lower weight, shorter length (good for my dad) and the fact that we don’t ever need the space in the LWB (it also meant a loss of one rear seat)!